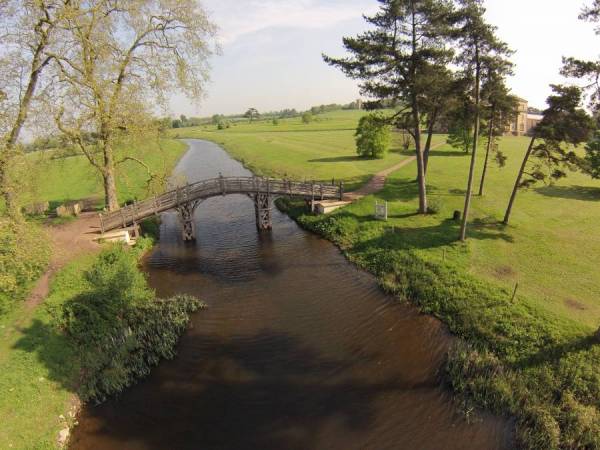 The original Chinese Bridge, designed by William Halfpenny in the 1740s was lost to rot and ruin by the mid-19th Century.  The National Trust as part of a 20 year restoration project of Croome Park, Capability Brown's first commission, were looking to reconstruct the bridge as it was one of the only elements he retained in his design from the existing park.

The works at Croome Landscape Park comprised of: damming the river to create a dry work area; de-watering and relocation of fish; creation of an access roadway and footpath; construction of abutment foundations, bridge piers and abutment walls; installation of drainage; temporary works; assisting with bridge construction and the re-instatement of the site following completion.

At tender stage WM Longreach were selected for this project, after proposing an innovative solution to reduce construction time and impact on the heritage and environment, aswell as for demonstrating efficient on previous works at Croome on the Wetlands and River in the past.

The haul road was excavated with a long reach excavator, lined with membrane and topped with recycled aggregate.

To create the dry area 2 Aqua Dams offered a more sustainable way of creating a dam across the river, keeping the environmental impact to a minimum as well as avoiding the need to dig borrow pits in the grounds risking the disturbance of exisiting heritage.

We were able to work sensitively and to schedule despite historical paths and stonewalling being revealed during the construction of the haul road and excavations of the bridge foundations and piers.  Abutment walls were built using stonemasons and faced with bath stone to keep continuity with the restoration of the House.

Good co-ordination of the different teams involved with the project was key to its success, with several information days held during construction to inform and attract visitors.