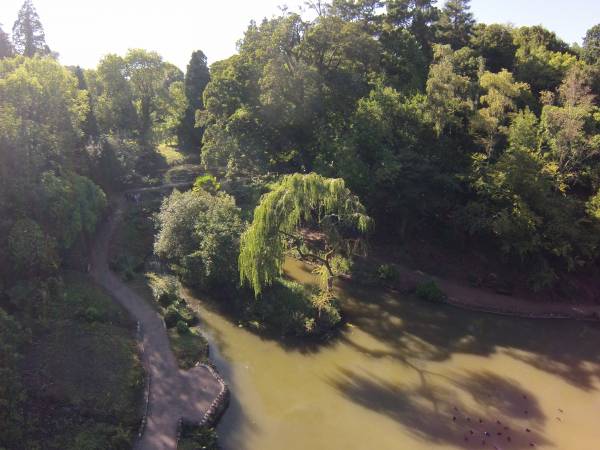 Located within a steep sided valley, accessed by very narrow roads, the restoration of these lakes was always going to be a big challenge.  Here the same micro climate that had protected the many rare trees and plants surrounding the lakes for hundreds of years would prove by contrast the greatest challenge to the lakes maintenance and restoration.

Access was severely constrained by the dense woodland in which the lakes were located and public access to the space as an attraction had to be maximised during works.

Challenges aside, historical value of the site, a popular tourist attraction since  Victorian times and constructed in the medieval period by monks of Torre Abbey prompted the need for action.

The works required the restoration of the 3 lakes to create a sustainable environment with each of the lakes offering different functions: silt trap, wildlife haven, ornamental pond.  The works required to achieve the restoration included: drain down and de-silting of the lakes, lake dam wall and edge repairs (rectifying existing leaks with new stone work, installation of Nicospan or new benched clay to seal), stone cascade repairs, installation of new drainage culverts, repairs and resurfacing of paths alongside lakes and associated landscaping.

WM Longreach proposed an innovative pumping solution.  This was developed to overcome the access constraints and involved 6000 tones of silt being pumped 500m up the steep valley from the lakes to storage lagoons which had been excavated.  These lagoons had inbuilt drainage allowing the water to drain from the silt back down to the lakes.  The custom built vibrating filter on the pump also prevented larger debris blocking it as it was loaded by small long reach machines.

Impact was minimised using small specialist long reach excavators run on bio oil with rubber tracks allowing them to move around the lake paths.  Pumping avoided the need for dump trucks, reducing emissions, damage to the park and increasing public safety.  Pollution was minimised through good management (silt traps), sampling and monitoring of water quality ensuring there was no contamination.