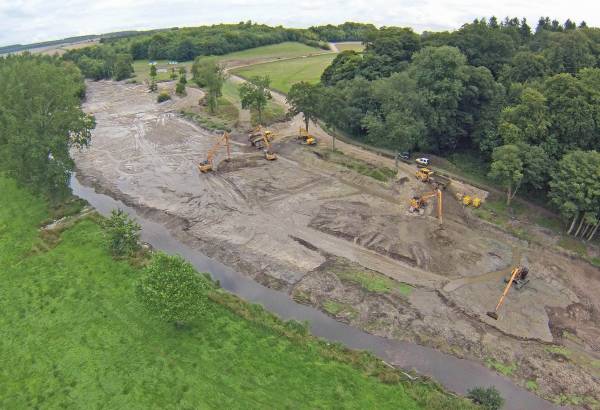 The 9,000 acre Fonthill Estate consists of farmland, woodland and gardens with commercial business units and residential property available to let.  With minimal maintenance on the lake over the last 200 years, it silted up with water depths in places less than 700mm, affecting the ecological health of the lake.  The estate had been planning its removal over a 10 year period.

With such massive volumes of silt to remove, agreements were reached with the Environment Agency and Natural England, and a scheme developed with WM Longreach over almost 12 months.

Two areas were identified on the lake, separated by an access bridge - one 22000m3 and the other 71300m3.  With such large amounts of silt to remove this was a full scale earthmoving operation with haul roads needing to be constructed to ensure trucks removing the silt could operate.

During the summer months of August and September, August proving the wettest for the last 12 years (112mm against the 12 year average of 68mm) works commenced after the issue of the Envrionmental Permit and Licence.

Using up to 5 long reach excavators to remove silt from the lake and running a fleet of dump trucks along the custom built haul road, over 1300m3 of silt could be moved in a day, averaging 1000m3 per day on the first lake.

Fostering a one team approach and working closely with the estate, saw the project completed on time and within budget, with 22000m3 of silt moved in 22 days.